City of an Architect

on Saturday 12 February 2011 - 15:24:37 | by Mehbuba
Buildings and structures of the past, the cumulative wisdom manifest in spatial language, acquire increasingly greater significance with the passage of time. Physical evidence of history, these are important even when written treatise abounds. As a vehicle of cultural expression and experience, these speak louder than words. Dhaka has seen the rise and fall of several regimes that have left numerous structures of cultural, historic and architectural significance. It is our moral obligation to preserve this rich legacy for posterity— an impressive list of architectural heritage from mid-fifteenth century.

The land, its rivers and the lifestyle of the Bangladeshis have shaped a heritage that is at once similar and different from the neighbors. The culture of this land has evolved out of the diversity of socio-religious groups coexisting for centuries. While Islam, Hinduism, Jainism and Buddhism had tangible influence on the local art, music, dance, drama, folklore, language, literature, festival and culinary traditions, so did the foreign invaders and settlers like the Portuguese, Turks, Persians, Afghans, Arabs, British and Burmese. Architecture epitomizes these multifarious traits and influences.

Notwithstanding the rich heritage, Bangladesh lacks proper stance and policy on architectural conservation. Conservation is more of an exception than a rule; and more is in ruin than restored. The traditional buildings are fast disappearing; every day ushers in new destruction. New buildings, bland and faceless, with no reference to the existing fabric, are frustrating the efforts of those who want nothing but sensitivity and respect to the old urban fabric. The popular haunts of intellectuals, nobility and upstarts no longer exist. The special cuisines that made old Dhaka famous are now a rarity. The promenade on the Buckland Bund; the colorful processions that marked religious and social events; numerous stories that find expressions in novels and non-fictions are mere nostalgic tales of the past. Roads and culverts have replaced the canals of the once ‘Venice of the East’. What could have been a living museum is gradually transforming into a jumble of soulless, sterile concrete and masonry.

The legislations originating in British laws are narrowly focused on archaeological preservation which are unable to meet the needs of architectural heritage and conservation. The pervasive forces of urbanization and high economic pressure have fueled unplanned urban growth; insensitive development has encroached, altered and deteriorated beyond recognition or even destroyed many a heritage structures and artifacts. The hot humid sub-tropical climate and the recurrent natural calamity took its toll; so did general ignorance on the importance of heritage; and non enforcement of even the rudimentary regulations. The prevailing social and institutional environment in the country does not appreciate architectural heritage or its preservation— a concern not commonly shared, nor is it an agenda in public or professional domains.

Dhaka, historically and architecturally a very rich city, is celebrating its 400 years of becoming a capital— the first of several such occasions under different regimes. But many of its citizens neither are aware of the heritage that glows amidst the dense and crowded old Dhaka lanes and neighborhoods, nor do they care. It is, indeed, a disappointment as the city is not a recent phenomenon; it has toiled on for centuries, with a flamboyant flourishing for three and a half centuries under the Mughals and later, the British. The traditional architecture of the city bears the reflections and recollection of these ages, along with some definite examples found from the pre-Mughal era.

Civilizations have evolved, developed and decayed for centuries in Bangladesh. Many races invaded this region, some settled in this fertile and beautiful land and made it their own, while others just looted its wealth and left. They occupied many sites, built many religious and civic buildings, forts and palaces, establishments and monuments leaving behind signs of excellence. These are evidence of our glorious heritage and symbol of our pride and identity. They merit preservation for posterity, to be studied, documented, published, conserved and restored. They should be a part and parcel of our city plans and future development programs. Heritage conservation is not mere ‘preservation’ for preservation’s sake. It transcends preservation to appreciation of the culture and heritage; to retrospection and self analysis; and finally to the enrichment of the soul. Heritage conservation is not premised on nostalgia but on the necessity of recognizing and valuing the history and the roots of a nation that bestows meaning to the very essence of existence.

Architectural education today produces architects who prefer a pristine site to be able to raise a building with a shimmering hyper look. The responsibility of unique architectural heritage falling prey to scrupulous development falls on the educational system too that does not utilise the wisdom our forefathers have left for us. However, some architecture programs in the country are showing flickering hope since the late 1990s by integrating awareness and knowledge of heritage architecture into their curricula. Despite the fact that this has been talked about by the architects community in Dhaka since the mid-1980s, there has very little expertise developed in the area either in the form of academicians or practitioners. Despite a profusion of architectural heritage buildings only a few remain to testify to the past glory. There has been little comprehensive exploration, study and documentation. Only 372 sites and monuments in the whole country enjoy government protection, 26 of these are in Dhaka city.

The North South Architecture School, possibly the fastest growing such program in the country, took various steps from the very beginning to make its students aware of the situation. For example, they have so far documented and prepared measured drawings of more than 100 buildings in and around Dhaka, most of which deserve to be on the Heritage List. Unfortunately some of them like the Jagannath University Library have already been destroyed. The students also study the history and socio-economic context of the people and the locality where the building is situated. The School during every semester break embarks upon heritage trips to many corners of the country. Some of the places visited by the faculties and students together are the heritage structures in and around the towns of Comilla, Mainamati, Mymensingh, Bogra, Rajshahi, Gazipur, Narshingdi, Savar, Khulna, and many others that one can but should not lose count of.

As a result of the entire process, the School organized “Old but New, New but Old”— a 3-day international workshop on architectural heritage conservation and 2-week long exhibition of measured drawings in March 2007 at the British Council. The event was participated by a large number of students, academicians, researchers, and young professionals not only from architecture, but from planning, engineering, history, geography, art and archaeology too, from home and abroad. Later in the coming years, Mahbubur Rahman, the professor who has been the driving force behind all these activities, edited a 380 page book “Old but New, New but Old” that UNESCO published. With hundreds of rare photographs, maps and references, this book distributed by OMNI remains the most thoroughly researched book on the topic in Bangladesh, and a must buy for the lovers of this city and its heritage.

With unblinking determination, Prof. Rahman ventured forward to author another book named “City of an Architect”, which has just recently been published by the Delvistaa Foundation. The book, meant for the common people, saw Dhaka City in the eyes of a young inquisitive architect, who wondered around its "52 bazaars and 53 lanes”, and loved, and describes the beauty of its architecture and the society that produced it. It is meant for people who are equally in love with the city and its culture, its heritage and its various winding roads to an endless journey. The unique book includes 162 sketches of the heritage, cultural and several other significant buildings in Dhaka without using any photograph. 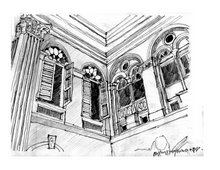 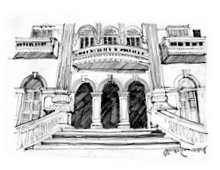 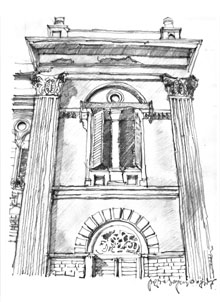 These were drawn by the architecture students of North South University and Universiti Teknologi Malaysia. Of these, 80 selected sketches of architecturally ornate facades in bold strokes are now on display at the Gallery of Fine Arts at the Asiatic Society, in the vicinity of Nimtali Deuri— the first major colonial period building in the city that is under conservation work now. The exhibition to run till February 13, is open for general public between 12 noon to 8PM everyday.

------------------
All sketches are from the book (copyrighted to Mahbubur Rahman) and those who sketched (Mohammad Mahmudur Rahman Masum) owns all rights, those are published after permission from the copyright owners and NOT published under CC 3.0 terms.
Comments (11)

You must be logged in to make comments on this site - please log in, or if you are not registered click here to signup
Previous Next